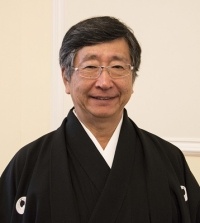 Mr Koji Tsuruoka arrived in London on 6 June as the new Ambassador of Japan to the United Kingdom.  Below are some words of greeting from him:

During my career in the diplomatic service, I have been fortunate enough to have numerous opportunities to confer, cooperate and exchange views with diplomatic colleagues from the UK.  It is my great pleasure to have been posted to London as Ambassador to the United Kingdom, and I greatly look forward to working with my British colleagues here.  Since I started my career in the foreign service in the United States, I have been in charge of multilateral issues such as the United Nations, and in my most recent position I was engaged in the TPP negotiations.

Japan and the UK enjoy a formal relationship that goes back more than 150 years.  Except for the unfortunate period in the mid-20th century, our ties have flourished and we have come to share vital fundamental values including democracy, the rule of law, human rights and open and transparent markets.  We are both committed to upholding the international system and norms.  Dynamic economic cooperation is at the heart of our very solid bilateral relationship.  This includes active investment from Japanese companies, who have created a total of 140,000 jobs in this country.  Now, however, our cooperation is extending far beyond commerce and investment.  We are also working together regarding issues such as counter-terrorism and climate change, and critical regional issues including defence and security cooperation.

My mission as Ambassador here is to strengthen bilateral relations in every major respect – political, economic and cultural – so as to bequeath an ever more dynamic partnership to the next generation.  I am also keen to introduce Japan to more British people by showcasing our country’s soft power through Japan House, which will open in London next year.  It will be a solid and permanent base for a broad range of cultural activities, from traditional to ultra-modern, and should also enhance the synergy among different Japan-related organisations.  As Japan is hosting the Rugby World Cup in 2019 and the 2020 Tokyo Olympic and Paralympic Games, I imagine there will be compelling reasons for more British people to want to visit Japan.  Our aim is to serve the interests of both Japanese citizens in the UK and British people who are interested in Japan, and my Embassy will dedicate itself to nurturing effective communication between our two countries and peoples.  I look forward to the support and cooperation of all of you in my efforts to take our partnership to yet greater heights.