2016/7/13
On 13 July 2016, Ambassador Tsuruoka bestowed upon Mr Bill Emmott, the Order of the Rising Sun, Gold Rays with Neck Ribbon in recognition of his significant contribution to promoting understanding of Japan not only in the UK but all over the world by publishing books focusing on Japanese politics and the Japanese economy. 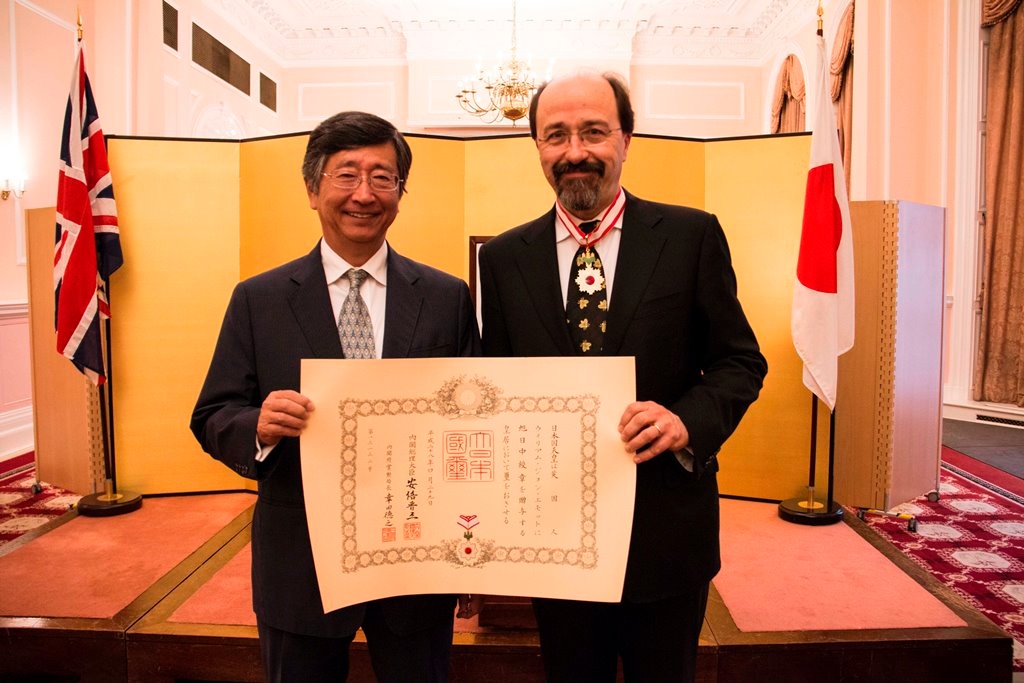 Mr Emmott was a former editor of The Economist and is currently a member of the UK-Japan 21st Century Group. His achievements are not limited to his outstanding work as a journalist but also include his vital role as a leading figure in the Japan-UK relationship. As editor of The Economist, and since leaving that publication, Mr Emmott has produced 13 Japan-related books and has had a number of articles on Japan carried in several newspapers, both in Japanese and English. These activities directed people’s attention to Japan and helped nurture a deeper understanding of the country both in the UK and throughout the world. After the Great East Japan Earthquake in 2011, he visited the devastated area several times and called for objective and responsible reporting of that unprecedented disaster. His efforts helped to prevent the spread of irrational fear about the situation in Japan at a time when many organs of the media were issuing inaccurate and sensational reports.

Since 1994 he has also been a member of the UK-Japan 21st Century Group. In this role he has not only helped prepare the agendas for meetings but has also visited Japan to attend events in person, taking part in numerous conferences and high-level discussions.

In 2014, he was appointed visiting professor at Shujitsu University in Okayama, Japan. With his deep knowledge of international, political and economic issues and his rich experience as a journalist, he is making a significant contribution to education in Japan.

Ambassador Tsuruoka praised Mr Emmott's numerous achievements and thanked him for the many contributions he has made to the bilateral relationship between the UK and Japan. In particular Ambassador noted that "with all the books and articles that he has written, he has conveyed an objective picture of Japan to the public, not just in Britain but the English-speaking communities in the world."