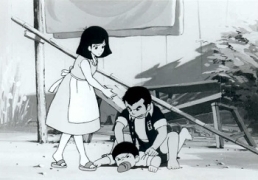 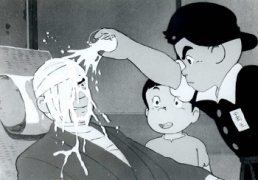 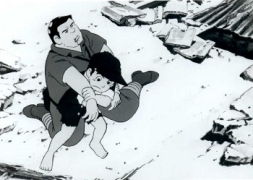 Hiroshima in the summer of 1945

Gen Nakaoka is in the second grade at the local elementary school. He is living with his parents, an older sister and a younger brother. His mother is pregnant and is expecting to give birth soon. Although the family is poor, their lives are happy and harmonious. On 6 August, the US bomber Enola Gay takes off from Tinian Base and chooses the city of Hiroshima as its target. At 8:15am, the bomb is dropped. After an intense flash of lightning, the city is destroyed, with burned corpses everywhere and thousands of people, horribly injured by pieces of glass, are bleeding and dying. Gen miraculously survives. Running back home, he finds his father, sister and brother trapped under the collapsed house. He and his mother desperately try to save them, but their efforts fail. Gen and a neighbour, realising it is hopeless, carry the mother away from the now burning house. They watch it in helpless horror. The baby is born prematurely.

On 15 August, the Japanese Government surrenders. Gen’s mother says ‘Why not sooner!’ The food shortage becomes so serious that the mother and the baby suffer from malnutrition. One day, Gen meets a boy who resembles his dead brother and who has lost his family in the A-bomb attack, and welcomes him as a member of his family. Gen’s little sister dies from lack of food. Stricken with A-bomb sickness and afraid it will get worse, Gen sees a ray of hope in the barren fields.

This film contains scenes which young viewers may find frightening. The British Board of Film Classification has rated the film as 12A, the category which indicates that no one younger than 12 may see the film unless accompanied by an adult.