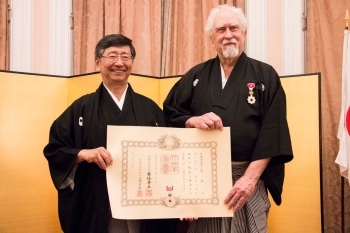 On Thursday 22 February 2018, Ambassador Tsuruoka bestowed the Order of the Rising Sun, Gold Rays with Rosette on Dr David W. Hughes, former Head of the Department of Music and former Chairman of the Centre of Music Studies, School of Oriental and African Studies (SOAS), University of London, in recognition of his significant contribution to promoting cultural exchange and mutual understanding between Japan and the United Kingdom.

Dr Hughes has played a significant role in promoting understanding of traditional Japanese music, particularly folk music, in the UK. From 1987 until his retirement in 2008, Dr Hughes taught music at SOAS, where he is now a Research Associate of the Department of Music and the Japan Research Centre. Throughout his extensive career, Dr Hughes has published a wealth of literature in Japanese and English on traditional Japanese folk music. Some of his most notable publications are Traditional folk song in modern Japan: sources, sentiment and society and The Ashgate research companion to Japanese music, the latter of which he co-edited. The former is arguably Dr Hughes’ most significant contribution to the study and understanding of traditional Japanese folk music. It marks the culmination of his 30-year academic career specialising in this subject and his 10 years of living in Japan studying the art form locally and formally.

Alongside his academic contributions, Dr Hughes has been a key figure in promoting Japanese traditional art forms to the wider public in the UK. He founded three groups which continue to this day: the SOAS Min’yo Group, the London Okinawa Sanshinkai and the SOAS Noh Group (which has subsequently become part of the University of London Noh Society). These groups are at the forefront of teaching and performing Japanese music in the UK and have successfully contributed to iconic key events including the 1991 Japan Festival and Japan 2001, as well as to Japan Matsuri in recent years. He has also organised over 200 performances featuring visiting Japanese folk musicians in the UK. At these events he often acted as an interpreter, translator or commentator so that audiences in the UK could come to understand the social context from within which the pieces had been created.

In 2011 Dr Hughes received the annual Japan Society Award for “outstanding contributions to Anglo-Japanese relations and understanding” for his role in making traditional Japanese music better known among people in the UK.

In his speech, Ambassador Tsuruoka said “It is no exaggeration to say that a significant number of people in the UK owe their exposure to Japanese music or performance art directly to Dr Hughes as he has demonstrated them extensively around the country.” 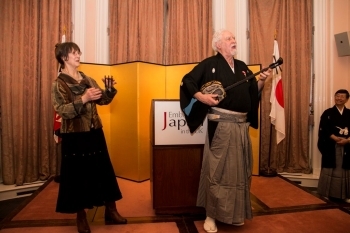 After receiving the decoration from the Ambassador, Dr Hughes thanked the many people who had facilitated and supported his study of Japanese traditional folk music over the 45 years since he first came across an LP record of Japanese music in the University of Michigan music library in 1973. Following his speech, Dr Hughes and his wife Gina Barnes performed a rendition of the Okinawan folk song Tanchame, followed by performances from core members of both the SOAS Min’yo Group and the London Okinawa Sanshinkai during the evening reception.