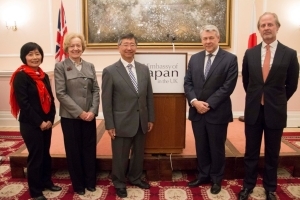 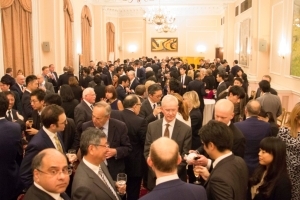 In his remarks, Ambassador Tsuruoka expressed his appreciation for collaboration between British and Japanese legal professionals in order to foster application of the Rule of Law. He also highlighted the importance of stability and security on the international stage, and the role that lawyers from both nations can play in supporting the rule-based international order. The Ambassador said he hoped the event would provide an opportunity to promote friendships and better UK-Japan relations in the legal field.

In their remarks, Professor Chizu Nakajima and Mr Scott Hopkins, co-chairpersons of the BJLA, expressed their gratitude to the English judiciary and legal professionals for receiving Japanese scholars and visitors. They highlighted the commitment of the Japanese government to international cooperation, and the importance of personal friendships and contacts based on mutual trust in international cooperation.

The Right Honorable Lady Arden of Heswall, Justice of the Supreme Court, subsequently led a toast to the success of the BJLA. She put focus on the importance of small connections in creating significant effects, particularly when it comes to UK-Japan collaboration.

More than 160 Japanese and British guests were in attendance including the Supreme Court Justice, Director of Public Prosecutions, senior members of the Judiciary of England and Wales, Japanese Lawyers based in London, and Japanese Prosecutors and Assistant Officers who are in the UK to attend the British Japanese Criminal Justice Seminar.