2019/8/9
On 19 July 2019, at the reception for the participants of the 2019 JET (Japan Exchange and Teaching) Programme held at SOAS University of London, Ms Sarah Parsons was awarded a Commendation by Ambassador Tsuruoka for her invaluable contribution in forging closer links between the UK and Japan. 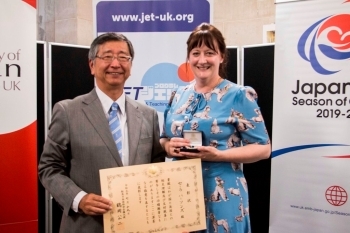 Ms Parsons was on the JET Programme from 1995 to 1997 in Ojima-machi, Gunma Prefecture. During this period, she spent a lot of time with local Japanese people and their families, learned Japanese and developed a keen interest in Japanese culture. Having returned to the UK, she worked for the Japan Local Government Centre in London from 1999 to 2002, helping its seconded Japanese staff adapt to their lives and jobs in the UK. She was also heavily involved in the London Chapter of JET Alumni Association (JETAA) as a treasurer.

In 2013, she became a Career Coordinator of JETAA and helped bring about the resumption of careers fairs for JETAA members. From 2014 to 2019, she was the National Chair of JETAA, serving more than 6,000 registered members. As the chairperson, she oversaw social, cultural, educational and professional engagement across the UK to further Japan-UK ties. She was also involved in organizing events for JETAA Midlands.

Ms Parsons also engaged with many other Japan-related organizations, including the Japan Society and the British Japanese Parliamentary Group, and worked to raise the profile of the JET Programme and JETAA.

At the reception, Ms Parsons thanked the Ambassador and paid tribute to the members of JETAA. She stressed the importance of deepening understanding between Japan and the UK through enhancing international exchange.