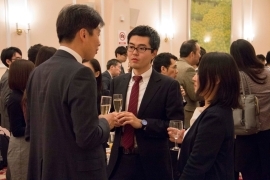 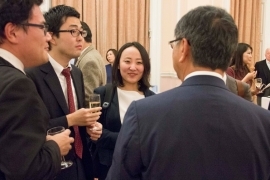 On 28 October 2019, the then Ambassador Koji Tsuruoka gave a speech for young Japanese lawyers in the UK, followed by a reception. This event was co-hosted by the British-Japanese Law Association and was the first of its kind.

Mr Tsuruoka spoke to young Japanese lawyers studying and working in the UK about his career and experience. He first spoke about why he chose to enter the Ministry of Foreign Affairs (MOFA), drawing on his childhood as the son of a diplomat. His ultimate aim has always been to abolish war, and he decided that he wanted to make use of his experience living abroad to improve understanding between Japan and the world. To do this, he studied law at the University of Tokyo, which gave him a strong foundation in knowledge of the law. He also studied at Harvard Law School after entering MOFA, where he learned a different approach to logic and argument, honing his tools of persuasion.

He then spoke about Japan's role on the world stage. "Japan has an international duty to protect world peace. The world is varied and full of people of different races, religions, cultures. Japan should always work to allow all people to coexist and prosper together, while respecting each other's diversity. Japan has many opportunities now to show its value on the world stage as a model for protecting world peace." he stated.

There was a short Q&A session where Mr Tsuruoka drew on his experience of negotiating the TPP to illustrate the importance of collaboration and partnership. The session was followed by a reception for the guests. Around 40 young Japanese lawyers and the senior members of BJLA were in attendance.