On Thursday 30 January 2020, Ambassador Yasumasa Nagamine bestowed upon Professor Marie Conte-Helm The Order of the Rising Sun, Gold Rays with Rosette in recognition of her long time dedication and significant contributions to the promotion of mutual understanding and cultural exchange between Japan and the United Kingdom. 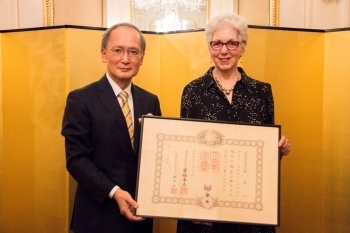 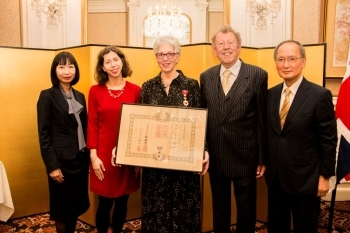 Starting her career in educational outreach at the Embassy of Japan in the 1970s, Professor Conte-Helm went on to have a brilliant academic career at Sunderland and Northumbria Universities where she specialised in Japan-UK relations and the history of the relations of the two countries. Publishing several books and papers focussing on the advancement of Japan’s relations with the UK and Europe, Professor Conte-Helm’s works shed light on how these ties came to flourish and prosper.

Actively engaged in cultural exchange activities throughout her academic career, Professor Conte-Helm served on various committees for Japan-related festivals, including the 1991 Japan Festival and Japan 2001. Her involvement in these activities provided numerous opportunities for new local employees of Japanese companies to learn more about Japanese culture and for Japanese families to be better able to interact and integrate with the wider UK community.

As Director General of the Daiwa Anglo-Japanese Foundation, Professor Conte-Helm immersed herself in further projects, including scholarship programmes providing opportunities for the next generation of British leaders to learn the Japanese language. In recognition of her services to UK-Japan educational and cultural relations, Professor Conte-Helm was awarded an OBE in 2011. That same year she was also appointed to the position of Executive Director of the UK-Japan 21st Century Group, one of the foremost bodies dedicated to fostering the relationship between Japan and the UK. Her years of dedicated work and support have been highly praised by members of the group.

In his speech, Ambassador Nagamine paid tribute to Professor Conte-Helm’s contributions saying, “Not only has she left her mark on today’s dynamic Japan-UK relationship, she has also touched many lives along the way,” emphasizing her outstanding contributions to Japan-UK relations. During her acceptance speech Professor Conte-Helm said it was a great honour to receive the commendation in particular for something she has enjoyed doing for so many years. Thanking her husband and daughter for all their support and everyone for joining in the evening and sharing this very special occasion, she said she was very grateful for having received the honour and she looks forward to continuing her many connections with Japan.

In a toast Sir David Wright, former Ambassador to Japan, said it was a great privilege to have had the opportunity to work with Professor Conte-Helm and to be able to offer congratulations to her on this occasion.

The event was attended by more than fifty members of the UK-Japan community, including academia, government and industry, and concluded with a celebratory drinks reception.