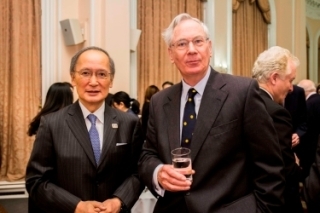 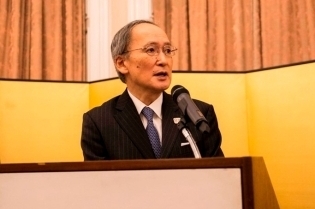 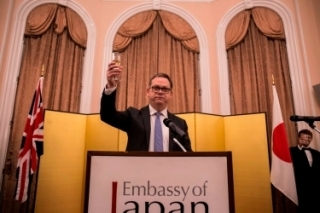 The Embassy of Japan held a National Day Reception on 27 February 2020 in its ballroom, to celebrate His Majesty the Emperor’s 60th birthday. More than 300 guests participated in the event, including many British people involved in Japan-UK relations, Japanese citizens in the UK, Members of Parliament, Government representatives, Ambassadors and High Commissioners as well as other representatives of the diplomatic corps.

Ambassador Yasumasa Nagamine and Mrs Nagamine welcomed guests, including HRH Duke of Gloucester and Mr Nigel Adams MP, Minister for Asia of the Foreign and Commonwealth Office.  In his remarks, Ambassador Nagamine spoke about the upcoming State Visit of Their Majesty the Emperor and Empress, and highlighted the very good relations between Japan and the UK in all areas of cooperation pre and post BREXIT.  He touched upon the Tokyo 2020 Olympic & Paralympic Games and vowed to boost the momentum for the Japan-UK Season of Culture.

Mr Adams made a toast, heralding the success of last year’s Rugby World Cup held in Japan, and hoped for the same success for the Tokyo Olympics & Paralympics.  He reiterated the already great Japan-UK partnership in all areas including investment, science and trade, which will be developed further in an ambitious manner following BREXIT.  He mentioned that the Foreign Secretary’s visit to Japan last month right after BREXIT was consciously planned due to the important nature of Japan-UK relations.  He also touched upon the upcoming State Visit stating that it is an honour to receive Their Majesties on their first trip abroad since being enthroned and raised his glass to His Majesty’s health and happiness for his 60th Birthday. 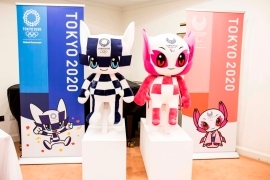 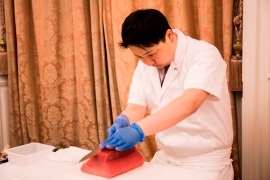 For more details please see below: