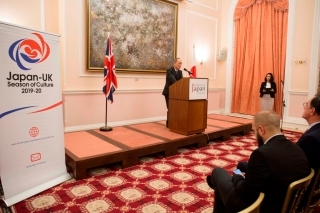 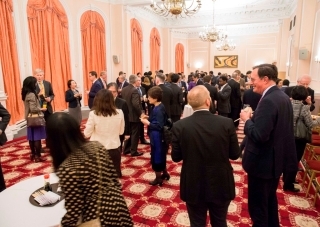 On 12 March 2020, Ambassador Yasumasa Nagamine and the British Japanese Law Association (BJLA) hosted the Japanese British Lawyers Networking Reception. This was the third such Reception, since the celebration of the BJLA’s 20th anniversary in 2018. Our guest of honour was the Rt Hon Lord Reed of Allermuir, and this year we were also honoured to have Judge Yuji Iwasawa of the International Court of Justice give a keynote speech.

In his remarks, Ambassador Nagamine expressed his appreciation for the long-standing and valuable relationship between British and Japanese legal professionals, based on their strong mutual commitment to professionalism and proper interpretation of the law, be it common law for the UK or statute law for Japan. The Ambassador said he hoped the event would provide an opportunity to strengthen the relationship between British and Japanese lawyers.

Professor Chizu Nakajima and Mr Scott Hopkins, co-chairpersons of the BJLA, expressed their gratitude to the Japanese government for its support of international cooperation in the legal profession, as well as to the British judiciary and lawyers for receiving Japanese scholars and visitors. They highlighted the importance of personal friendships and contacts formed through such international cooperation, and expressed their wish for the Reception to create and strengthen such bonds.

In his keynote speech, Judge Iwasawa reminisced on his time studying in the UK. He spent much time in Cambridge, including with his family, and enjoyed his experience, particularly a memorable meeting with the Duke of Edinburgh. He provided a clear explanation of the workings of the ICJ, how cases have been brought and viewed, and the future of the ICJ. As the legitimacy and importance of the Court’s function has been recognised across the world by various states, the number of cases brought has increased. The ICJ will need to adapt to better manage its increasing caseload, in order to continue to function properly and efficiently.

The Right Honorable Lord Reed of Allermuir, President of the Supreme Court, subsequently led a toast to the success of the BJLA. He thanked the Ambassador for his hospitality, and discussed the significant and multi-faceted relationship between the UK and Japan, not only in commerce, culture and international cooperation, but also on a personal level, making such legal relationships increasingly important. He praised the role of the BJLA in promoting such exchanges.

Around 80 Japanese and British guests were in attendance including senior members of the British judiciary, British lawyers and barristers, international legal professionals and Japanese Lawyers based in London.