2020/12/17
On 8 December 2020, Ambassador Yasumasa Nagamine bestowed upon Mr Takaaki Hanaoka, Secretary General of the Japanese Chamber of Commerce & Industry in the UK, The Order of the Rising Sun, Gold and Silver Rays in recognition of his sterling contribution to promoting economic and cultural exchange between Japan and the UK as well as the welfare of Japanese residents of the UK. 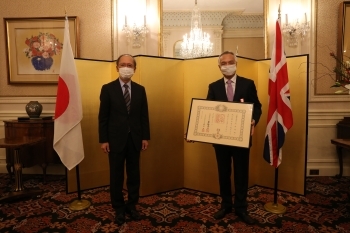 Mr Hanaoka took on the role of Secretary General of JCCI in June 2009 and has played an important role on behalf of the whole Japanese business community in the UK. In particular, he was centrally involved when the JCCI served to represent the opinions and voices of the Japanese business community when the British Government was consulting on changes to the UK’s visa system.

Mr Hanaoka has also been involved in the organisation of major Japanese cultural events, being a key member of the organising committee for Japan Matsuri since the inception of the festival in 2009. Since then he has played a crucial role in negotiating with the relevant authorities, accounting, and fundraising, all of which have contributed to the enduring success of Japan Matsuri. In recognition of his achievements on the committee, he was appointed Chairman of the Japan Matsuri Executive Committee in February 2019.

He is also a member of the Project Team for the Sakura Cherry Tree Project, which is the flagship scheme of the Japan-UK Season of Culture, a bilateral season of cultural exchange between Japan and the UK jointly established by the prime ministers of the two countries in 2017. His experience in accounting and Japanese business has been indispensable in the management of the expenditure on the project, contributing to the goal of planting 6,500 cherry trees across the UK.

In addition, Mr Hanaoka has greatly served the wellbeing of Japanese residents of the UK through his activities as a board member of the Japan Association in the UK (JA).

In his speech, Ambassador Nagamine paid tribute to Mr Hanaoka’s acclaimed contributions to the Japanese community through his activities in JCCI, JA and Japan Matsuri. During his acceptance speech Mr Hanaoka noted that, since he had taken on the role of Secretary General of JCCI in 2009, the number of member companies of JCCI had increased by 20 percent, and that he was glad to have witnessed the growing presence of Japan in the UK. He concluded his speech saying that he was very grateful to have received the honour and that he looked forward to continuing his activities aimed at fostering the Japan-UK relationship. The award was conferred in autumn 2019 with the bestowal taking place on 8 December 2020.