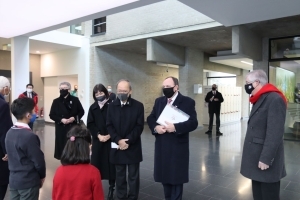 On Friday 4 December, Ambassador Nagamine attended the Cherry Tree Planting Ceremony at St Fagan’s National Museum of History. The Sakura Cherry Tree Project commemorates the 150-year history of friendship between Japan and the UK and looks forward to that continued friendship by planting more than 7,000 cherry trees in the UK from Japanese private sector donations. These are the first trees that the project has planted in Wales.

The ceremony was attended by Lord-Lieutenant of South Glamorgan Morfudd Meredith, First Minister or Wales Mark Drakeford, Chairman of the Cherry Tree Planting Project Executive Committee Keisuke Sano, Honorary Consul Keith Dunn of Cardiff, and mayors from all over the country. Ambassador Nagamine represented the Government of Japan to make an address about the friendship and economic ties between Japan and Wales and planted trees with the other attendees.

For more on the Sakura Cherry Tree Project visit: japanuksakura.org 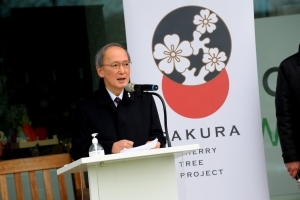 On Friday 4 December, Ambassador Nagamine met with First Minister Mark Drakeford and Welsh Director of International Relations Andrew Gwatkin before the tree-planting ceremony at St Fagan’s National Museum of History. During the meeting, the First Minister sincerely welcomed the Ambassador's visit to Wales and said that while it was a difficult situation, he was pleased to have met in person and deepen their friendship, and that he hopes the Ambassador will continue to be a bridge between Japan and Wales. The Ambassador said he was also pleased to have met the First Minister face-to-face. He continued to say that the longstanding relationship of exchange between Japan and Wales was revitalized by the 2019 Rugby World Cup and that the Embassy would like to support the further strengthening of economic and cultural ties in the future. Photo copyright Sony Europe B.V. UK Tec
On Thursday 3 December, Ambassador Nagamine visited the Sony UK Technology Centre in Pencoed, Wales. After receiving a presentation on the factory, he visited the manufacturing sites of some of Sony’s high-performance video cameras and the Raspberry Pi, a wildly popular PC processor.

The Centre’s Managing Director, Steve Dalton OBE, said he was pleased that the Ambassador had come to see for himself Sony's efforts to maintain its high standards for operation at the plant, which also has deep connections with the British royal family.

In response, the Ambassador expressed his gratitude for the willingness to accept the visit despite the pandemic. He furthermore stated that he was impressed by the large number of roles the plant carries out, the lively explanation he received about the plant from the employees, as well as everyone’s efforts to maintain high standards there. On Friday 4 December, Ambassador Nagamine visited Panasonic Manufacturing UK Ltd in Cardiff, Wales. After receiving a presentation on the factory, he visited the manufacturing site of microwave ovens and commercial PCs, as well as the product development office.

President Yasushi Morimoto explained that creativity and hard work helped them to meet the ever-changing needs of the market over the more than 40 years since the factory was opened and that the company is still operating with the support of local people in Wales. In response, the Ambassador thanked him for accepting the visit during such a busy time. He also expressed how impressive it is to maintain the support of the surrounding people and operate the plant for nearly half a century and that although the business environment in the UK is changing dramatically, he hopes that President Morimoto will continue to work for the benefit of Japan and Wales.