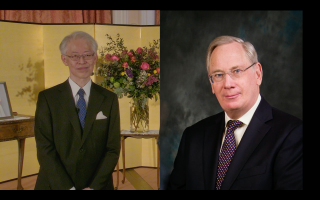 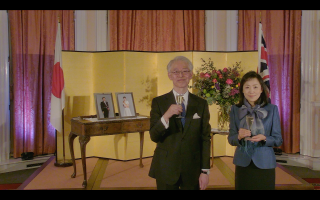 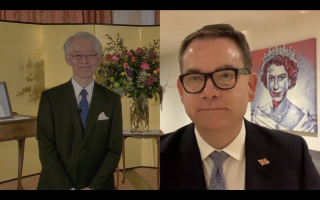 On 26 February 2021, the Embassy of Japan in the UK held a National Day Event to mark the birthday of His Majesty the Emperor of Japan. Due to the COVID 19 pandemic, the event was broadcast online. It was hosted by Ambassador Extraordinary and Plenipotentiary of Japan to the United Kingdom, Hajime Hayashi and Mrs. Hayashi. More than 500 guests participated in the event, including Japanese and British people involved in Japan-UK relations, Government representatives, Members of Parliament, Ambassadors and High Commissioners as well as other representatives of the diplomatic corps.

In the first half of the event, following the national anthems of Japan and the UK sung by the King’s Singers, a globally renowned British a cappella group, Ambassador Hayashi congratulated His Majesty the Emperor on his 61st birthday. Ambassador Hayashi said that this was the right moment for promoting relations between Japan and the UK, and outlined four major milestones (listed below) for doing so. He mentioned that all Embassy staff and himself committed to working towards this goal and looked forward to the cooperation and support of everyone.
Minister Nigel Adams, Minister of State for Asia gave a speech in which he looked back how the two countries have been deepening their cooperation through the Japan-UK Comprehensive Economic Partnership Agreement, tackling COVID-19 pandemic, the G7 process under the UK presidency this year, and Japan-UK Foreign and Defence Ministers’ Meeting (“2+2”), wished the best of luck for the successful Tokyo Olympic and Paralympic Games, and expressed his willingness in further strengthening of the bilateral relations through the close cooperation with Ambassador Hayashi. In response to the greeting from Minister Adams, Ambassador Hayashi expressed his gratitude for Minister Adams’s strong commitment to strengthening relations between Japan and the UK, and said he looked forward to working closely with him to that end. 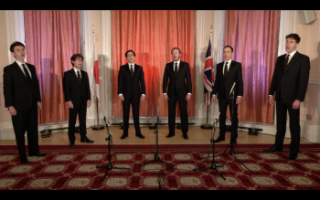 To mark the 10th anniversary of the tragedy of the Great East Japan Earthquake and Tsunami in March 2011, the King’s Singers who opened the event, performed “Hana wa saku – Flowers Bloom” arranged by themselves. This was an opportunity to think about the great strides that had been made in reconstruction and revitalisation of the affected areas and the generous support from the UK.


In the later half of the event, while introducing “The Japan-UK Season of Culture”, with the cooperation and support of the Japan Sake And Shochu Makers Association, a mini-seminar (how to choose sake, pairing with food, etc) was held by experts who are prominent in the world of sake and shochu. 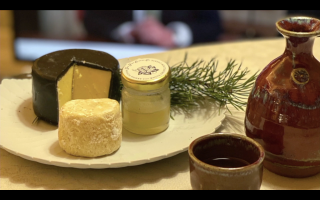 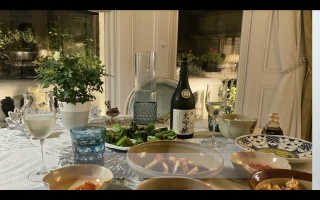