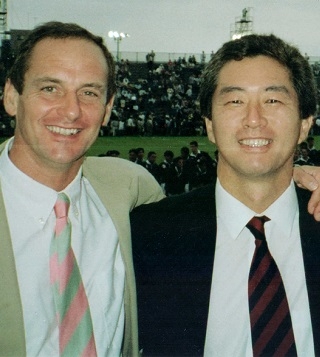 Ambassador Oku and Mr Reg Clark
On 17 April 2021, the Oku Memorial Trophy Rugby Tournament took place at Richmond Athletic Ground. This is the tournament which has been taking place since 2004 on a day close to the time when Ambassador OKU Katsuhiko* tragically lost his life in Iraq in November 2003 whilst working for the UN post-war reconstruction programme in that country.

He was a long-standing member of the Japan RFU committee and campaigned tirelessly for many years for their ambitions for Japan to host the Rugby World Cup, which was realized in 2019.

The organiser, Mr Reg Clark, played rugby at Oxford with Ambassador OKU then later played for Kobe Steel. He is now the CEO of Rhino, a British manufacturer of rugby equipment.

This year’s tournament was originally planned for December 2020 but was postponed to April 2021 due to the pandemic. Five teams took part and enjoyed playing touch rugby under a clear sky. The participating teams were: London Japanese, Kew Occasionals, Commons & Lords, Oxford University Alumni and Hertford College Oxford.

Ambassador HAYASHI Hajime stated in his message for the occasion that it was “heart-warming to see that the intense passion for rugby held by Ambassador OKU..., who worked so enthusiastically to deepen Japan-UK ties through sport..., has touched and inspired his friends and colleagues as well as younger rugby players from both countries”.

* On 29 November 2003 Mr Oku was posthumously promoted to Ambassador.