2021/7/2
On 2 July 2021, the Lord Mayor’s Committee for Peace and Reconciliation was awarded the Ambassador’s Commendation at Coventry Cathedral for its distinguished contribution to the deepening of mutual understanding and friendship between Japan and the United Kingdom by Ambassador Hayashi. 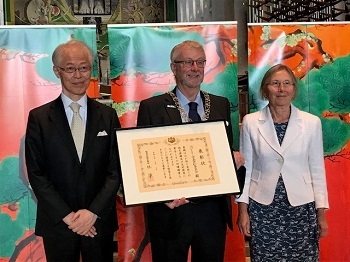 The Peace Committee, established in 1975, has held an annual Hiroshima Day Service to console the souls of the victims of Hiroshima every year since 1987. The service includes reading poetry which addresses the atomic bombings and the making of Japanese paper cranes so as to symbolise a commitment to peace. In doing so, the committee has been strengthening the bonds between Coventry and Hiroshima for more than 30 years.

Last year marked the 80th Anniversary of the air raid on Coventry as well as the 75th Anniversary of the dropping of an atomic bomb on Hiroshima. In his speech, Ambassador Hayashi paid tribute to the Peace Committee’s contributions by saying, “due to the pandemic caused by COVID-19, we had to wait for nearly a year to hand over the commendation. Now, I am most satisfied to come here and finally realise the mission with all of you today.”

Ms Ruth Longoni, who served as a chair of the Peace Committee in 2017, received the Certificate of Commendation one behalf of the Committee and thanked the Ambassador and the people who have contributed to the Committee’s activities. She stressed the importance of promoting peace and reconciliation both within Coventry and more widely and deepening understanding between Japan and the UK.