2021/7/12
On 12 July 2021, Ambassador HAYASHI Hajime bestowed upon Mr Timothy Thorburn Clark The Order of the Rising Sun, Gold Rays with Rosette in recognition of his significant contribution to introducing Japanese culture and promoting the understanding of Japan in the United Kingdom. 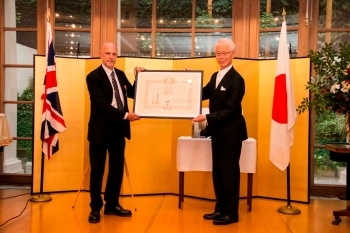 Having joined the British Museum in 1987, Mr Clark involved himself in numerous projects including Japan-related exhibitions and lectures, all of which did a great deal to foster greater understanding of Japanese culture and art not just in the UK but throughout the world.

In his speech, Ambassador Hayashi expressed his hope that, although Mr Clark had retired as the Head of the Japanese Section of the British Museum at the end of 2019, he would continue to promote the understanding of Japan in his role as an honorary research fellow of the Museum.

In the company of his former colleagues of the British Museum, Mr Clark expressed his gratitude to the many thousands of people in Japan who had helped and guided his work for more than four decades and also to the Embassy of Japan in the UK for its support for the British Museum.