2021/12/2
On Thursday 2 December 2021, Ambassador HAYASHI Hajime bestowed upon Sir Michael Rake the Grand Cordon of the Order of the Rising Sun at a ceremony held at the residence of the Ambassador of Japan. 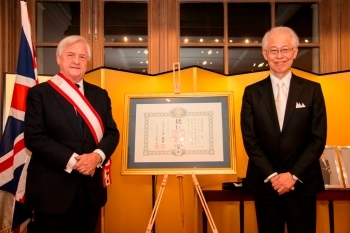 As Chairman of BT and then the CBI, Sir Michael has worked with Japanese business and government to strengthen economic relations and ICT cooperation between the UK and Japan.

At the ceremony, Ambassador Hayashi paid tribute to Sir Michael’s achievements to date, and expressed his hope for continued support towards the Japan-UK partnership.

In the presence of his family and former colleagues, Sir Michael conveyed his gratitude to those who had supported him in his activities over the years. Mentioning his fond memories of Japan, he also said the UK-Japan partnership, especially in the field of economy, is increasingly important and expressed his wish to continue furthering this effort.