2021/12/8
On Wednesday 8 December 2021, Ambassador HAYASHI Hajime bestowed upon Mr MITSUYAMA Yoshio The Order of the Rising Sun, Silver Rays at a commendation ceremony held at the residence of the Ambassador of Japan. 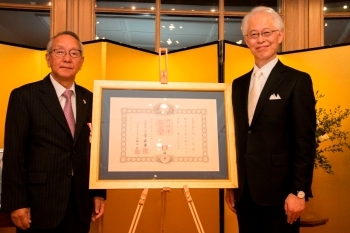 As President of the London Shakunagekai (UK Fukushima Prefectural Association), Mr Mitsuyama has worked tirelessly to support Fukushima Prefecture’s recovery effort following the widespread devastation of the Great East Japan Earthquake and Tsunami in March 2011. Mr Mitsuyama has contributed to a wide variety of fundraising efforts such as arranging charity concerts by London-based musicians, promoting Fukushima produce at the annual Japan Matsuri Festival in Trafalgar Square and working to eradicate negative perceptions against produce from Fukushima Prefecture following the Fukushima Daiichi Nuclear Power Station accident. In July 2012, Mr Mitsuyama also helped to open the Fukushima Garden in Holland Park, created to commemorate the deep gratitude of the Japanese people to the British people for their support and to convey their hopes for the speedy recovery of the affected regions.

In his speech, Ambassador Hayashi paid his respects to Mr Mitsuyama for his achievements and expressed his hope for Mr Mitsuyama’s continued support for the Fukushima recovery efforts.

In return, Mr Mitsuyama expressed his appreciation, and his wish to contribute to the continuing Fukushima recovery effort and the close friendship between Japan and the UK.