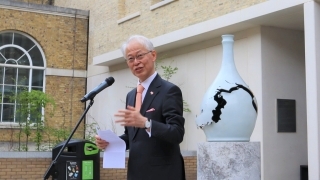 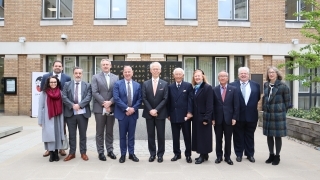 On 5 April, Ambassador HAYASHI Hajime attended the Japanese Garden rededication ceremony at University College London. The ceremony was held to celebrate the cherry trees gifted to the university through the Japan-UK Sakura Cherry Tree Project in 2020, as well as the monuments to the Choshu Five. The event was attended by Dr Michael Spence, UCL President & Provost, and members of The Sakura Cherry Tree Committee.

At the ceremony, Ambassador Hayashi remarked that it seemed very fitting that cherry trees, a symbol of Anglo-Japanese friendship, had been planted at UCL, a place with a long and outstanding history of exchange with Japan. He also expressed his hope that the trees and the monuments would evoke the deep amicable ties that Japan and the UK had shared for such a long time.

Afterwards Ambassador Hayashi had a meeting with President & Provost Spence, and they exchanged views on deepening academic exchanges between Japan and the UK.