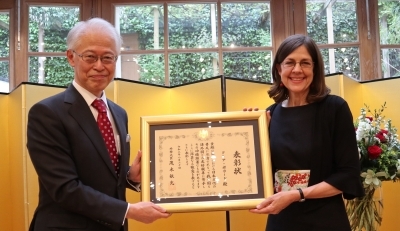 Dr Pollard has been working to promote Japanese culture as an expert in Japanese art, first at the Chester Beatty Library in Dublin, then at the Art Gallery of New South Wales in Sydney, and now at the Ashmolean Museum in Oxford. During her 26-year career, she has devoted herself to providing numerous opportunities for British people to access Japanese culture by creating galleries dedicated to Japanese art, organising a number of temporary exhibitions highlighting particular aspects of the collections and engaging in research and education.

At the ceremony, Ambassador Hayashi paid tribute to her substantial achievements and expressed the hope that she would continue promoting Japanese culture and deepening mutual understanding between Japan and the UK in the future.

In return, Dr Pollard expressed her heartfelt appreciation and reaffirmed her determination to foster even deeper cultural relations between the two countries.