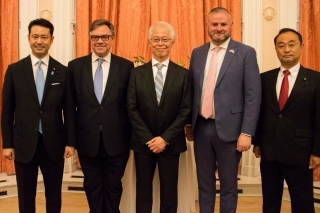 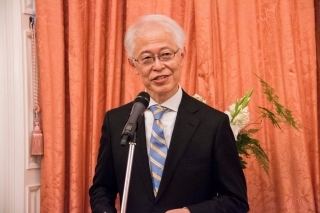 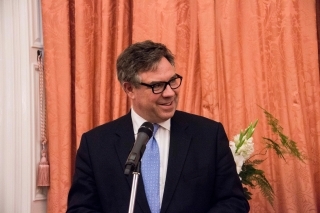 On 17 July, the Parliament League of Japan for revitalizing the Aerospace Industry and Ambassador Hayashi co-hosted a cocktail party at the Embassy, and invited a number of Japanese and British aerospace industry related guests.

The event was held on the occasion of the Parliament League of Japan for revitalizing the Aerospace Industry visiting the UK to participate in the Farnborough International Airshow (one of the world's largest aviation-related exhibitions) to be held from 18 July. A large number of Japanese and British government officials, aircraft manufacturing and industry officials participated in the exchange of opinions and business matching between the Japanese and British aircraft manufacturing industry, including Japanese Parliament Members Mr Taku Otsuka and Mr Hiroyuki Miyazawa, and Mr Jeremy Quin, Minister for Defence Procurement.

On this occasion, Mr Otsuka expressed his aspiration to disseminate Japan's high technological capabilities and products to the world and promote cooperation between Japanese and British companies, and Mr Miyazawa remarked that he would like to support forward-thinking Japanese companies and promote business expansion. Mr Quin first expressed his condolence on the passing of former Prime Minister Abe, and went on to say that cooperation and development in the Japanese and British aviation industry will lead to deepening of defense cooperation between Japan and the UK.

In addition, Ambassador Hayashi said that supply chains in the aircraft manufacturing industry need to be strengthened and transformed, given the changes in the global security environment, global environmental problems, and the progress of digitalization. Ambassador Hayashi anticipates that strengthening relations between Japan and the UK will contribute to the further advancement of the aircraft manufacturing industry, for example, through cooperation in fighter aircraft development.