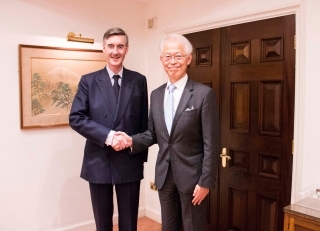 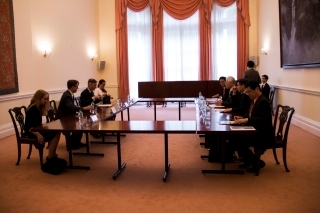 On 20 July, Ambassador Hayashi met with the Rt Hon Jacob Rees-Mogg, Minister of State (Minister for Brexit Opportunities and Government Efficiency), and representatives of Japanese business at the Embassy of Japan in the UK to exchange views on how Brexit, and British regulations, have affected Japanese companies.

Ambassador Hayashi and Japanese business representatives pointed out the importance of a transparent and predictable business environment for further scope and expansion of trade and investment between the two countries, and the importance of realizing smooth personnel transfer of business leaders between the two countries. Minister Rees-Mogg expressed his condolences on the passing of former Prime Minister Abe and his desire to further strengthen business ties between the UK and Japan.