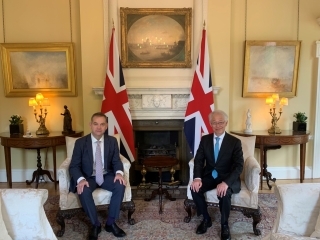 On 22 July, Ambassador Hayashi met with The Rt Hon Nigel Adams, Minister of State (Minister without Portfolio) to exchange views on the Osaka-Kansai Japan Expo scheduled to be held in 2025, and future relations between Japan and the UK.

Ambassador Hayashi noted that the momentum for the Expo is getting larger, with events being held in Tokyo and Osaka 1,000 days prior to the opening of the Expo, and that we should continue efforts to deepen and strengthen relations between the two countries. Minister Adams said that his government is looking forward to participating in the Expo and hopes that it will further deepen the relationship between the UK and Japan, and that the relationship between the two countries is extremely important not only from the perspective of economy and trade, but also security and defence.