2018/1/13
On Tuesday 9 January 2018, Ambassador Koji Tsuruoka awarded the Foreign Minister’s Commendation to Professor Shinichi Ohnuma, Professor at the Institute of Ophthalmology, University College London, for his contribution to Japan-UK academic and educational cooperation. 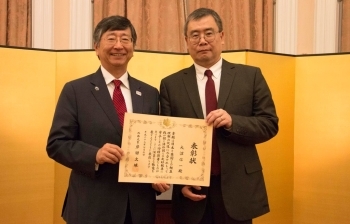 Professor Shinichi Ohnuma has worked tirelessly over many years to strengthen academic cooperation, to nurture future talent and to contribute to the reconstruction of Fukushima prefecture. In 2013, he organised a number of important events, including symposia with Japanese organisations at UCL in order to celebrate the 150th anniversary since the Choshu Five arrived to study at UCL. In 2014, he played an important role in the “Japan-UK Universities Conference for Collaboration in Research and Education” co-hosted by UCL and the Embassy of Japan in the UK. The conference was attended by 14 Japanese universities, 16 UK universities and the Prime Minister of Japan, Mr Shinzo Abe, and facilitated further collaboration opportunities not only with UCL but also for many universities both in the UK and Japan.

Professor Ohnuma has also worked to encourage mutual understanding between our younger generations. In 2015, he newly established the “UCL-Japan Youth Challenge” program, to promote interaction between young high school students in the UK and Japan. This was hosted and helped by many organsations represented in the UK, and has since been held every year with around 100 students from both countries.

In addition, he contributed greatly to his home prefecture, Fukushima, by arranging a Memorandum of Understanding between UCL and the Fukushima prefectural government, and supported UCL students to visit the prefecture.

At the ceremony, Ambassador Tsuruoka, congratulated Professor Ohnuma on his richly deserved Foreign Minister’s Commendation, and voiced his wish that Professor Ohnuma would continue his distinguished work to promote Japan-UK relations. Professor Ohnuma expressed his pride at receiving the award, his thanks to the many guests present for their support, and declared that he would continue to work for the collaboration between Japan and the UK.