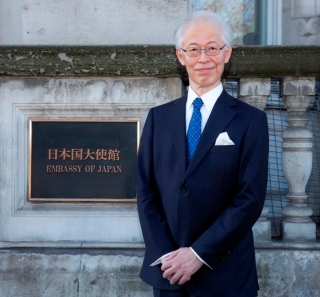 Having recently arrived in the United Kingdom to take up my post as Ambassador of Japan, I would like to extend my warm greetings to all of you. This is the first time for me to live in the UK, but I am not unfamiliar with Europe. In the past, I worked as Director-General of European Affairs Bureau in Japan’s Foreign Office. More recently I was based in Brussels as Ambassador of Japan to Belgium, and during that period I served as Chief of the Mission of Japan to NATO as well. In my earlier diplomatic career, I also served with the Permanent Mission of Japan to the International Organizations in Geneva, Switzerland. I am honoured and delighted to have been given this new opportunity in London.

Clearly, the coronavirus pandemic has had a severe impact on the United Kingdom, and the British people have had to accept drastic restrictions on their lives. I would like to express my heartfelt sympathy to all those who are affected by the pandemic. This situation of course applies to Japanese residents of the UK, and we at the Embassy continue to do our utmost to keep in touch with them and ensure their safety through offering advice and assistance.

As Ambassador, I aim to both expand and deepen the global strategic partnership between our two countries.  Following the completion of the Brexit transition period at the end of last year, the UK has embarked upon a new course.  In this regard, it is notable that on 1 January the Japan-UK Comprehensive Economic Partnership Agreement came into effect. This high-standard EPA will surely take our trade and investment relations to a new level. But our ties go far beyond the economic sphere. Japan and the UK are committed to further strengthening cooperation towards a free and open Indo-Pacific.  Furthermore, in the recent discussions bringing together our foreign and defence ministers (the “2+2” meeting), we reaffirmed that we are each other’s closest security partners in Europe and Asia respectively. As for other aspects of our relationship, through the ongoing Japan-UK Season of Culture we can look forward to a strengthening of ties in the fields of culture, sport and people-to-people exchanges.

Japan and the UK are collaborating on a growing number of issues facing the international community. With the UK presidency of the G7 this year, our two countries can play a leading role in bringing about a “united world” and constructing a post-Covid international order. Japan also intends to work even more closely with the UK, the host of COP26 this autumn, regarding policies for tackling climate change, starting with measures to promote decarbonization.

Let me reiterate my determination to work to boost Japan-UK relations and to work closely with the Japanese community here. In this connection, I will appreciate it if you provide me  any suggestions or advice you may have, as well as your support and cooperation.


HAYASHI Hajime
Ambassador of Japan to the United Kingdom