2021/11/11
Our Japanese Kitchen series travels next to Kanagawa Prefecture, the home of Japan's second largest city - Yokohama. Famous especially for its modern seafront - Minato Mirai and vibrant Chinatown district, the city was originally a small port town which went on to become the base for foreign trade in Japan. This brought much multiculturalism to the area which is reflected in many of the dishes that originated here - such as "Kaigun curry" (Navy curry) - which are now loved nationwide. 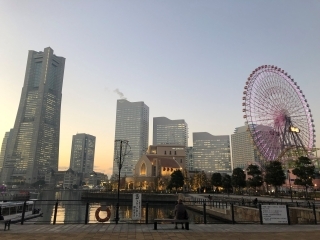 
Tokyo, the capital city of Japan, is well known for its attractions for tourists with its diversity in many aspects of life from fashion to food. But Yokohama, the second largest city in Japan, is also filled with interesting culture and historical charms for any visitor. It is a port town in Kanagawa Prefecture south of Tokyo with great sea views and an international atmosphere. It was one of the port towns which opened up to foreign countries when Japan ended its policy of seclusion in 1859, and became a base for foreign trade in Japan. Ever since then the city has been a hub for culture, economy and international exchange.

Such history explains why we can see a lot of diversity, a mixture of Japanese quality and internationality, in many aspects of Yokohama life. For example, many parts of Yokohama have historical buildings which show the fusion of Western style architecture with Japanese. Many of them were built with high towers so that commercial ships could easily navigate toward the port from afar. Crews dubbed those landmarks as King (Prefectural Council Hall), Queen (Tax Office), and Jack (Memorial Hall) and those nicknames were soon after picked up by the citizens too.

Although the preservation of such buildings has long been a core agenda of the city to make the best out of its rich history, it has not hesitated to modernize itself. For example, on the seafront of Minato Mirai (which literally means Port of Future) are tall modern buildings where the young gather for shopping and dining. That duality is indeed the greatest charm of the vibrant city of Yokohama.

The fusion of culture is not limited to buildings and atmosphere. Yoshoku, Japanese versions of western dishes, is very popular among the locals. One such dish is known as “Napolitan” spaghetti. The naming comes from the southern Italian town of Napoli but surprisingly it is not authentic Italian cuisine! The dish was invented after the post-war era by a Japanese head chef at one of the distinguished hotels in Yokohama called the Hotel New Grand. The hotel was built in 1927 after the huge earthquake in Kanto District and soon became symbol of hope for reconstruction. After the war ended in 1945, American soldiers were in town and their habit of eating spaghetti with tomato ketchup was picked up by locals. Soon the dish started to be served at kissaten, Japanese cafe-restaurants where you would enjoy reasonably priced food and chit-chat with your neighbours. The then head chef at Hotel New Grand witnessed that trend and thought he could make the dish into something more refined. That’s how the Napolitan was born and it has been widely popular until this day nationwide.

Ingredients (2-3 people) For the sauce 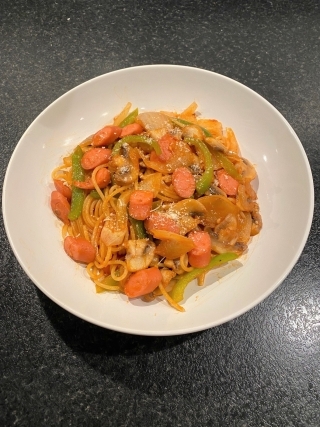 Instructions
1. Bring a saucepan of water to the boil and cook the spaghetti according to the instructions on the package.
(Note - save 2-3 tbsps of the water before draining the spaghetti once cooked.)

3. On a medium flame, fry the garlic, onion and frankfurters in olive oil for 2-3 minutes in a large fry pan. Add the mushrooms and green pepper and continue to fry until cooked.
(Note – make sure not to overcook the vegetables so that they do not become limp).

5. Add the cooked spaghetti to the pan and toss with the ingredients.

6. Serve on a plate and add grated parmesan cheese to taste.