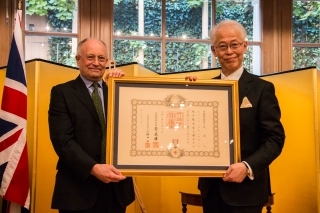 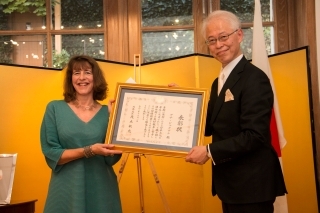 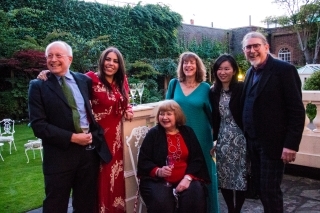 On Friday 1 October, Ambassador HAYASHI Hajime held a joint ceremony to commend the work of two curators at the Victoria and Albert Museum (V&A).

Dr Rupert Faulkner was formerly Senior Curator of Japanese Art at the V&A and continues as an Honorary Research Fellow. He joined the V&A in 1984 and contributed to the establishment of the UK’s first permanent exhibition space specialising in Japanese art. In 2015 he led the reconfiguration of the Japanese Gallery, organising an exhibition that emphasised contemporary aspects of Japanese arts and crafts and inspired viewers and practitioners alike, and establishing the foundations for the Gallery’s future development. Dr Faulkner was also involved in numerous special exhibitions on Japan, alongside lectures, events and research projects. For his role in these activities and in recognition of his prowess in promoting understanding of Japanese art and culture not only in the UK but on a global scale, Dr Faulkner was awarded The Order of the Rising Sun, Gold and Silver Rays in 2020.

Ms Anna Jackson is the Keeper of the Asian Department at the Victoria and Albert Museum and oversees the conservation, management, research and exhibitions relating to the V&A’s Asian collection, which is visited by four million people annually. She has particular expertise in Japanese design, textiles and kimono and has written numerous books on the subjects. In 2020, she curated the V&A’s Kimono: Kyoto to Catwalk in the exceptional circumstances of the pandemic. For these achievements she was awarded the Foreign Minister’s Commendation in December 2020.

At the ceremony, Ambassador Hayashi paid tribute to their substantial achievements and expressed the hope that they would continue to contribute to furthering the understanding of Japan in the UK in the future.

At the reception held after the ceremony, the two recipients enjoyed drinks with colleagues, friends and family who had gathered to celebrate their awards.